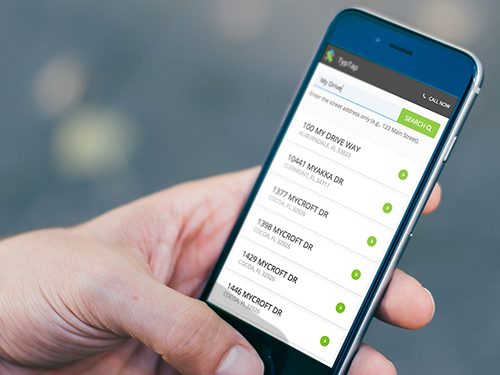 SUN SENTINEL: The first property insurance company that responded to Florida legislators’ 2013 call for more private flood solutions says it’s created another first. Homeowners Choice Property & Casualty has built what it says is Florida’s first regulated insurance company licensed solely for flood insurance. The website for the new company, called TypTap, went live on March 1. Property owners can get a flood insurance quote from the site in minutes, without phoning an agent. The company offers policyholders alternatives to the National Flood Insurance Program, which racked up $23 billion in debt after Hurricane Katrina and Superstorm Sandy. Since then, lawmakers have been focusing on ways to encourage the private sector to provide alternatives to policyholders facing steep premium hikes each year. Most of the companies offering private flood insurance target luxury homes or large commercial properties that pay high premiums for policies backed by the National Flood Insurance Program. Some sell supplemental insurance underwritten by surplus lines companies like Lloyds of London. Homeowners Choice, which insured more than 163,808 residential properties in 2015, was the first insurer approved to start writing primary flood insurance after state lawmakers in 2013 called for private solutions, and after the state Office of Insurance Regulation issued an informational memo clarifying state and federal regulations. TypTap is targeting homeowners in high-risk flood zones whose premiums are increasing by up to 18 percent a year, company officials said. That’s roughly 700,000 of the state’s 2 million flood insurance customers, said Paresh Patel, chairman and CEO of HCI Group Inc. Of the 700,000 in flood zones, 265,000 are in the tri-county area, Patel said. TypTap isn’t likely to siphon the roughly 1.3 million living in what the Federal Emergency Management Agency labels as lower-risk “X” zones, he said. “People with $400 [a year] policies — most of those folks won’t have an issue. This isn’t aimed at them,” Patel said. But someone in a “V” zone paying $5,000 a year might find a $2,500 policy through TypTap, Patel said. Kevin Mitchell, HCI Group’s vice president of investor relations, says the company can help homeowners “in trouble ” with homes built in the 1950s-’70s, who weren’t grandfathered into artificially low subsidized rates, and possibly with a “challenged elevation certificate.” “We could potentially offer them relief,” Mitchell said. Patel and Mitchell are particularly proud of TypTap’s state of the art website, typtap.com, and the ease with which potential customers can use it to get a premium estimate. The company has already collected information about eligible properties throughout the state, Mitchell said. Homeowners can get a quote by going to the website and typing in their address and desired coverage limits. “You can get a quote in seconds, coverage in minutes,” Mitchell said. The company offers customers higher coverage limits — up to $500,000 for buildings and $250,000 for contents. Under the National Flood Insurance Program, coverage is limited to $250,000 for buildings and $100,000 for contents. In addition, the company offers to cover the replacement costs of contents. Replacement coverage under the federal program is limited to actual cash value. And because the company already has your elevation data, no elevation certificate is needed. HCI Group decided to create the standalone company after deciding that offering flood insurance to its existing property insurance holders limited its growth potential among customers of other property insurers, Patel said. In November, the Tampa-based company received state approval to sell standalone flood insurance policies beginning in 2016. If the do-it-yourself approach to pricing and buying flood insurance proves successful enough, the company plans to offer it in other states, and possibly sell property insurance through the portal as well, Patel and Mitchell told investors during the company’s fourth quarter and year-end earnings call last week. rhurtibise@sun-sentinel.com, 954-356-4071 View article on Sun Sentinel website